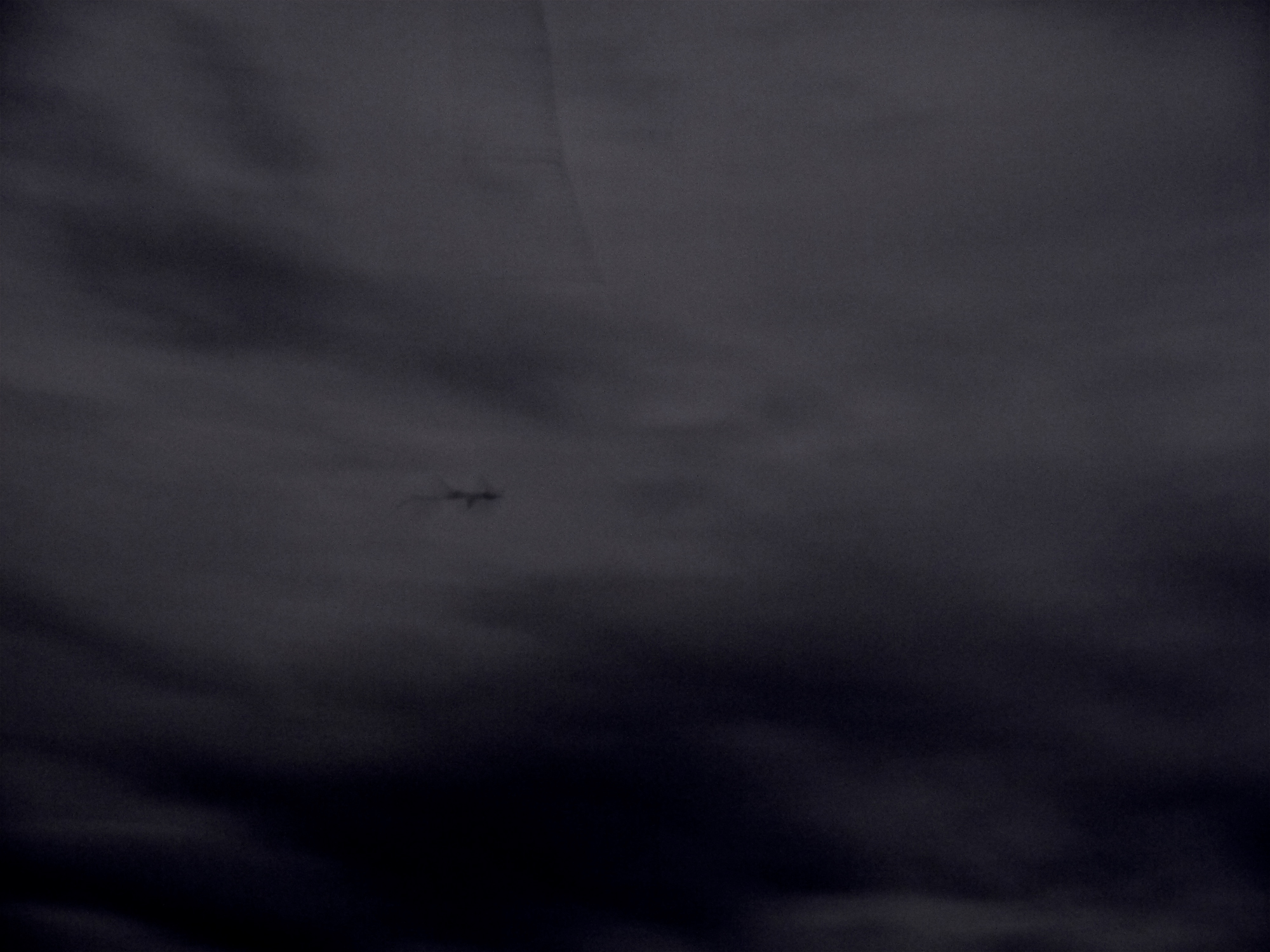 Night flights
No need for sight

I am a soaring scar
Shaped like a shooting star

I call out to Neptune
Just to spite the moon

Every shadow I read
Creates a wild heart stampede

I tell fearful happenstance
To take a chance

I teach reckless abandon the news
About having nothing to lose 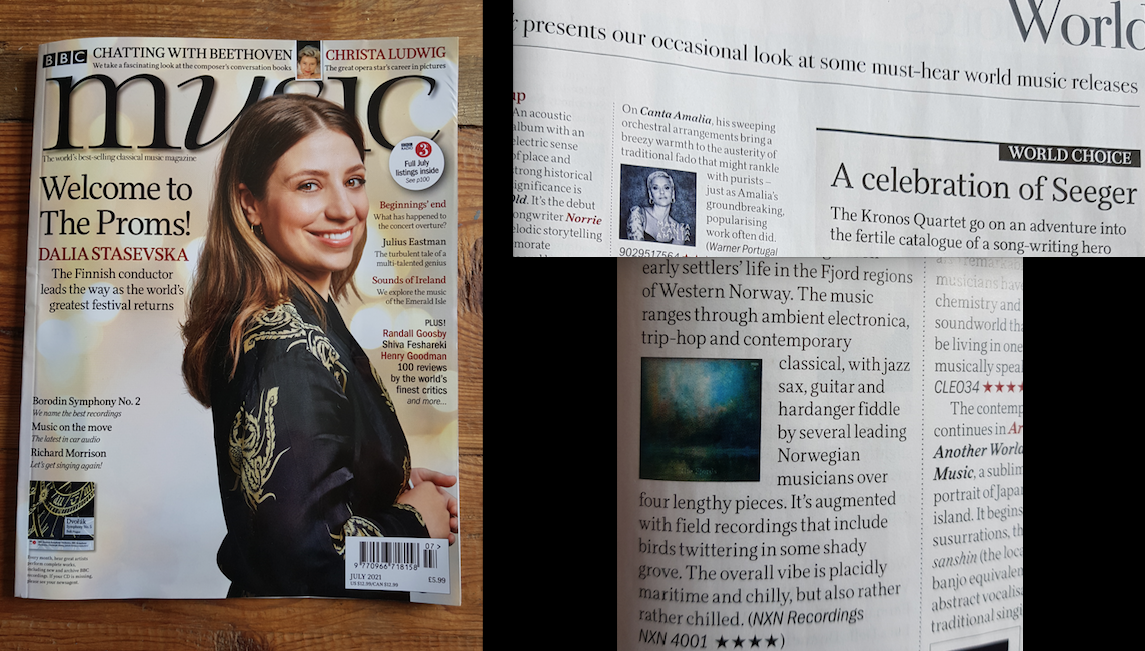 A spellbound, shimmering sense of place is revealed on ‘Hidden Soul of the Fjords’ by Bergen-based singer Heidi Torsvik and American composer/producer Winter Lazerus.

It’s augmented with field recordings that include birds twittering in some shady grove. The overall vibe is placidly maritime and chilly, but also rather chilled.

“From the call of ancient chants and the mysterious murmuring of the fjords, to the beats of contemporary music and spoken word, ‘Hidden Soul of the Fjords’ keeps revealing layers of imagination and inspiration that pull the listener into swells of spirit and deep pools of soulfulness.” 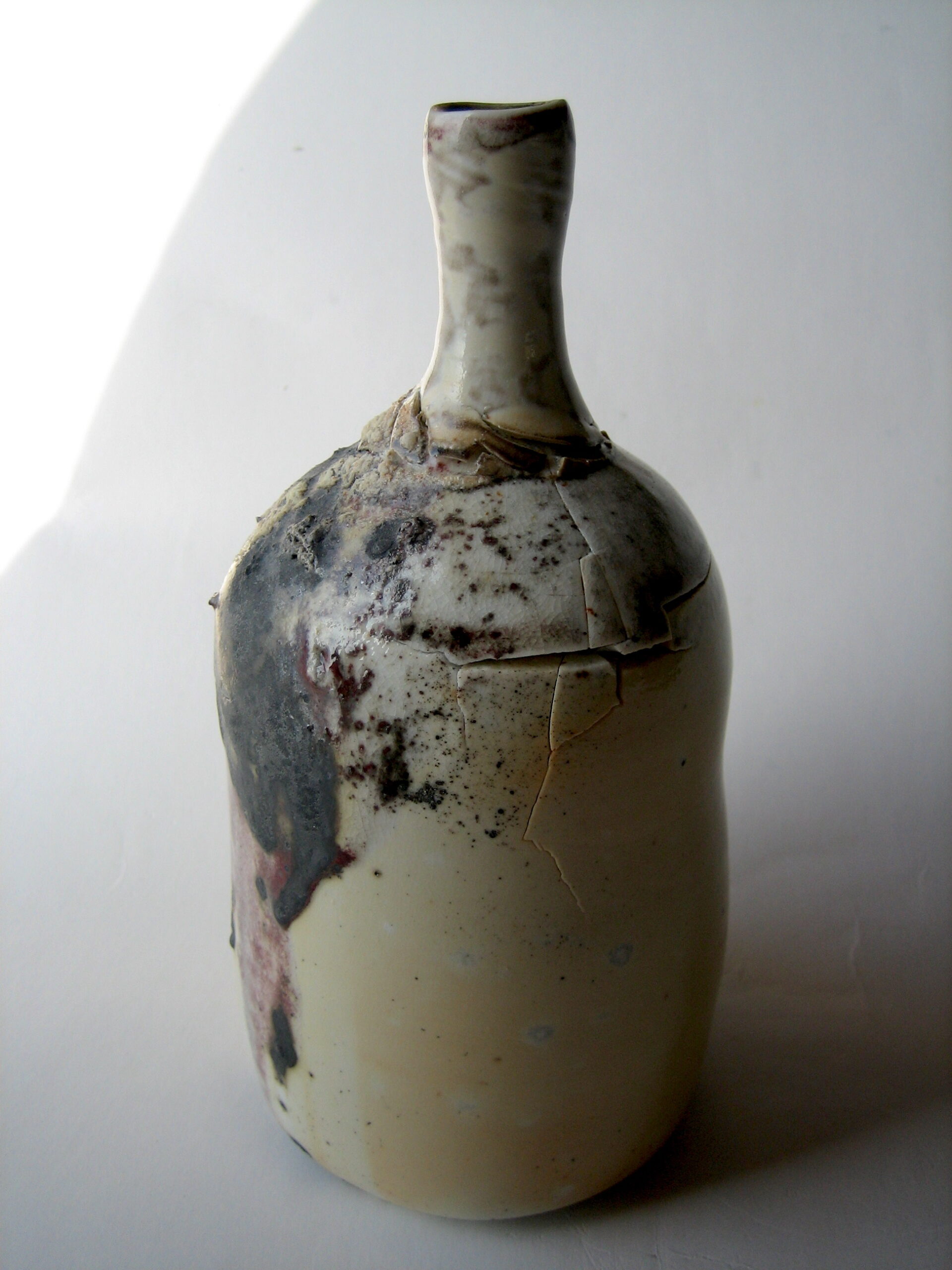 Bottle By Svein Thingnes
Made of stoneware which is Raku glazed and fired at 1320 degrees Celsius. The dark part is fishing nets (salmon nets) impregnated with copper-phosphate. The salmon nets are made of hemp which was used traditionally. The horizontal crack in the upper part is the result of placing a stone in the bottle before firing it which then causes the bottle to crack in this manner when fired in the kiln. 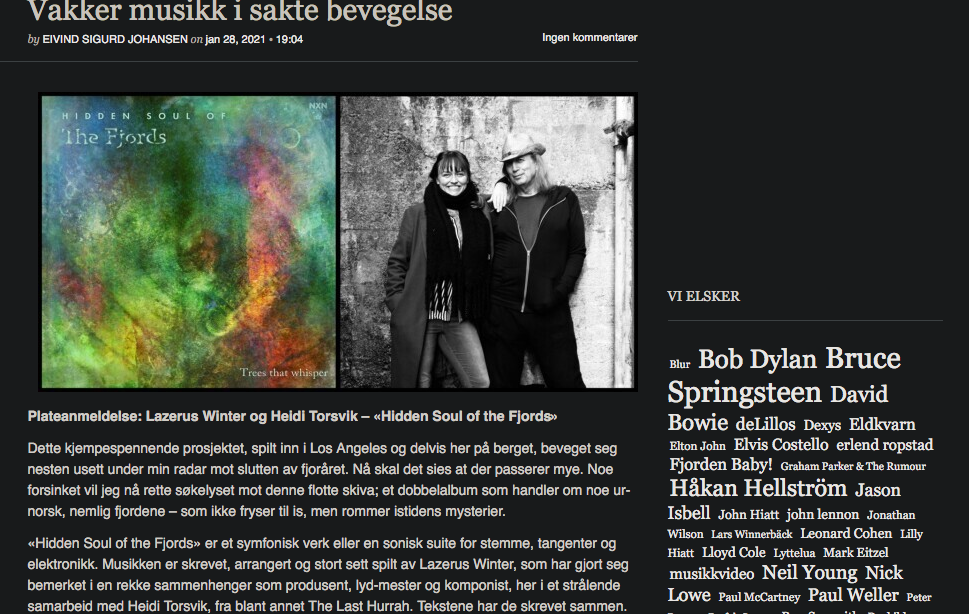 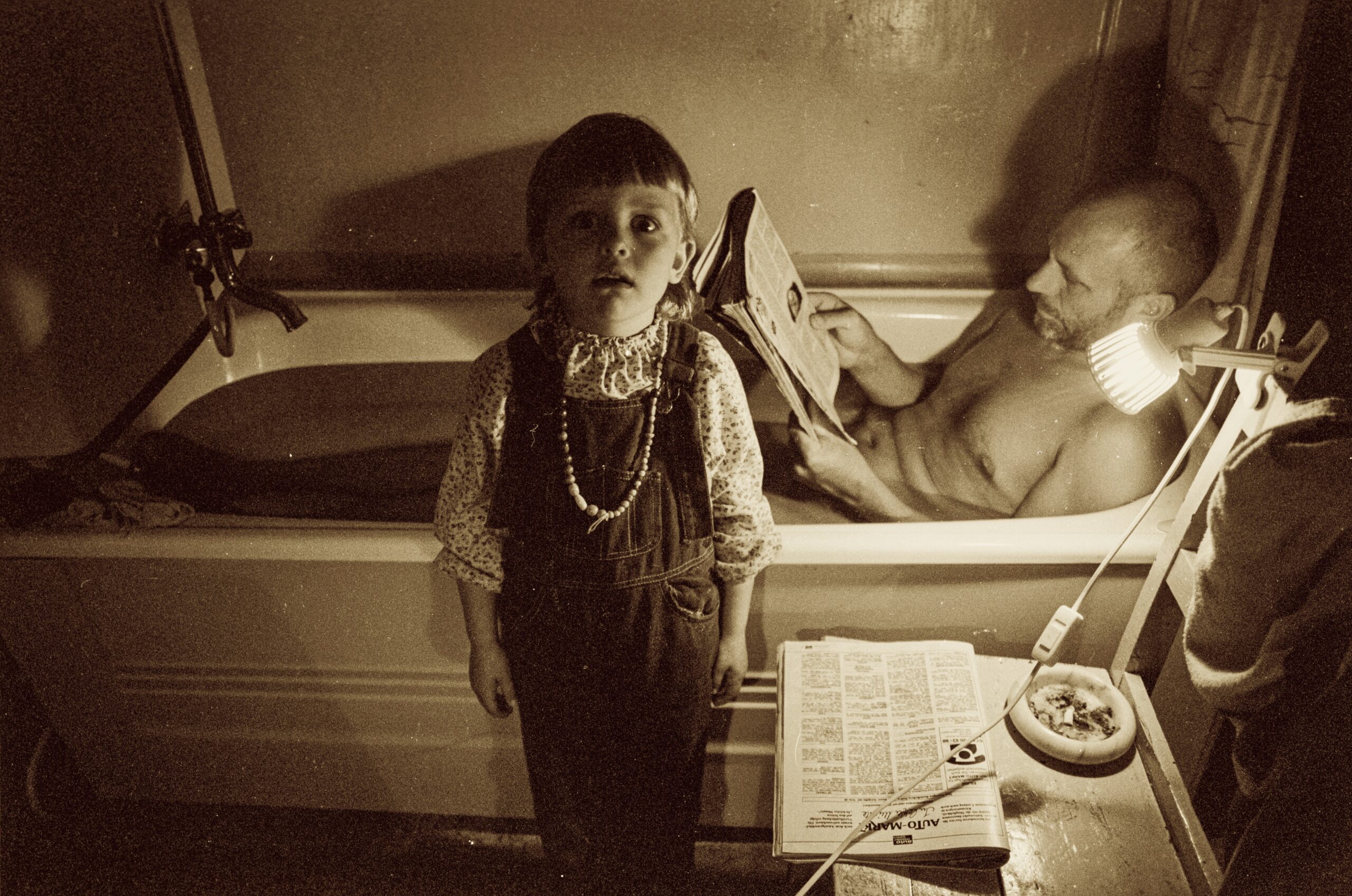 Had time to form
Dusty meaning

And you were there

So little time
Dust to dust

And I don’t know
If I remember
Or forget

Shaking a feather
From the wing
Of a wild crow

To float above
All meaning
Of love 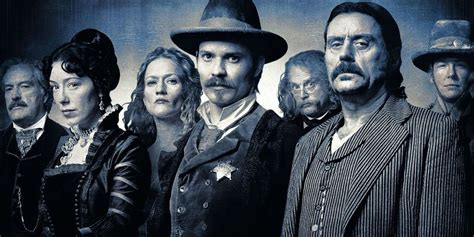 There’s an old hit song, in which the opening line allows, “Well, I’ve never been to Spain, but I kind of like the music.”  Well, I’ve never been to Norway. The closest I’ve been to taking in the majesty of the fjords is through an episode of Travel Man:48 Hours in which Richard Ayoade visits Bergen and embarks on a cruise through the surrounding topography.  Still, when we began to write the television series Deadwood, I’d never been to the Dakotas, but was able to imagine I had until I did actually visit. Of course, a lot of consumers of art will have no prior experience of its subject either, which is a big part of the point: to tell a story.

Which is a long-winded preamble to discussing  Lazerus Winter’s new recorded suite Hidden Soul of the Fjords. One funny thing: while I have never known the fjords, I have known composer/musician Winter for forty-odd years, since the days when we recorded and performed rock and roll music together. So, while I believe I can imagine the geographical splendor invoked by these four musical pieces, I can attest with confidence how strongly they evoke the deep inner warmth of their composer.

Bob Dylan recently recorded a song  he titled “I Contain Multitudes.” While Dylan’s lyric is in part tongue in cheek, Fjords’ initial movement “Presence,” serves earnestly as an opening tour of aspects of its composer’s beautiful soul. Unlike a formal overture, which previews musical themes to be repeated,  “Presence” offers a survey of various discrete “feels,” (as Brian Wilson called his musical modules —  before the term was abused by marketing people), opening up the ears and minds of the listener for what is to follow.

What follows immediately is something Winter calls “Beneath the Surface Touch the Sky,” introducing into the mix a mass of female vocals, which express the duality suggested by the title by evoking at once both the ethereal and the earthly.

This would seem like an appropriate time to mention that all of the vocals, at times as many as 500 separate voices, were performed and arranged by Heidi Torsvik, aka Heidi Goodbye, ex-teen jazz prodigy, solo artist, perhaps best known to critics for her work on Spiritual Non Believers, the 2011 debut album by Bergen group “The Last Hurrah!!”

In “Shining Darkness”, Torsvik’s intonations are pared to a single, lovely voice. Darkness is an oft-used (overused?) metaphor. Par exemple, In his 1973 song “Time,” when David Bowie sings of “shining through this darkness,” it’s nominally a reference to the dark a performer waits in backstage, but also a metaphor for loneliness and, moreover, death. In contrast, while I understand no Norwegian, and can’t speak directly to the lyrics, I suspect that the “shining darkness” invoked in Winter’s song is literal, as in when the opposite side of the world is facing the sun. If it is also meant to evoke the unknown, the darkness seems to be faced blissfully and without fear.

The final section is the longest, its title broken down into sections: ” Heart (Trees That Whisper/Reflections/Heart).”  The plaintive, soothing, opening part is carried again by Torsvik’s voice (here doubled), following which the singing and instruments give way (a bit like in dub or a DJ’s bass drop) to the literal sound of an electronic heartbeat. This basic expression is soon picked up and built-on rhythmically in almost hip-hop fashion, adding instruments, gathering in various exquisite colors, and eventually exploding  into a dynamic section of Winter’s extroverted, liquid lead guitar. Reaching its apex, the final section again recalls the voices that ease the build down to help carry us out on a cloud.

In sum, the sounds are deep and lovely, like the subject matter they evoke. Varied, dynamic, and multi-dimensional.

You owe yourself a good listen. 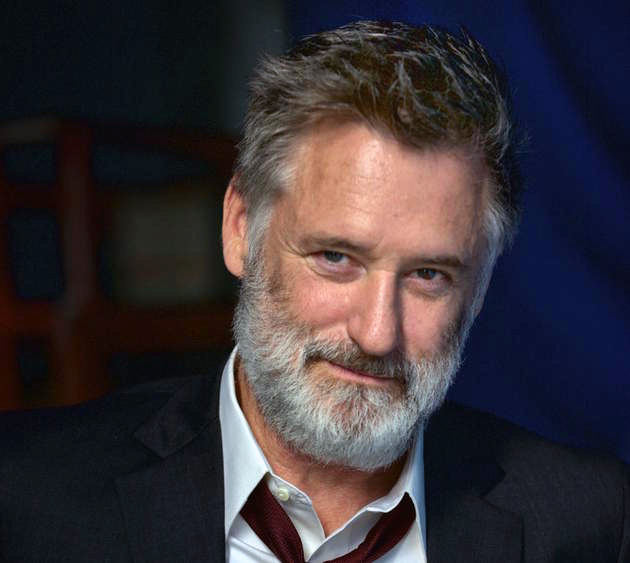 From Bill Pullman – Re:“Hidden Soul Of The Fjords’, a collaborative effort between Lazerus Winter and co-creator Heidi Torsvik:

We are driving in through the hill country of western Pennsylvania and fusing the terrain with the four movements of “Hidden Soul of the Fjords”. The cinematic aspect of this subtly shifting journey of sound is underlined if you are moving along in a car and have the balances right on the sound system.

These two artists are patient and yet energetic in the layered progression of each movement. I recommend you take this voyage with them. You’ll have your favorite sections and maybe sections you will need a second listen to. I’m getting ready to listen again. I want to see why I found the last minutes of each of the movements so graceful, tasty and truthful. 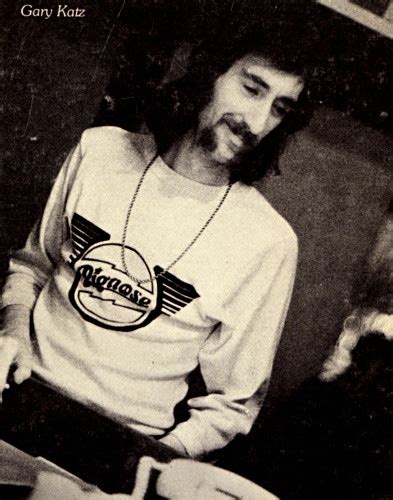 From the desk of Gary Katz:

Music is and has been the energy source of my life. I don’t play..well, hardly, I don’t read, well, not really, and at the same time I have an innate understanding of various musical genres by “feeling it”.

I know how that sounds, (and even more so in print), but if I was sitting in front of you I feel assured I could convince you of my inexplicable reality, which I’m sure is not singular to me. I say this because I’m going to talk about and “review” a new album, an exercise I inherently have negative feelings about concerning “The Arts,” except, on those rare occasions, when I do it.

To ‘Hidden Soul Of The Fjords’, a collaborative effort between Lazerus Winter and co-creator Heidi Torsvik, which is a beautifully crafted, musically induced emotional journey. In full disclosure, I worked with Lazerus closely for some time, some time ago, and admire his musical growth, creating beautiful orchestrations complimenting Heidi’s extraordinary vocal textures and overall original musical sensibility; it is a package worth opening.

The haunting opening bars of “Presence”, the 1st movement of 4, are quickly joined by the equally haunting textures of Heidi’s vocal entrance, which melts in to create the perfect mood and tone for the emotional journey you’re about to take through and beyond the infectious groove of Reflections in “Heart” in the 4th and last movement.

Put your phones on or your buds in, lean back and you’ll feel and be chill! 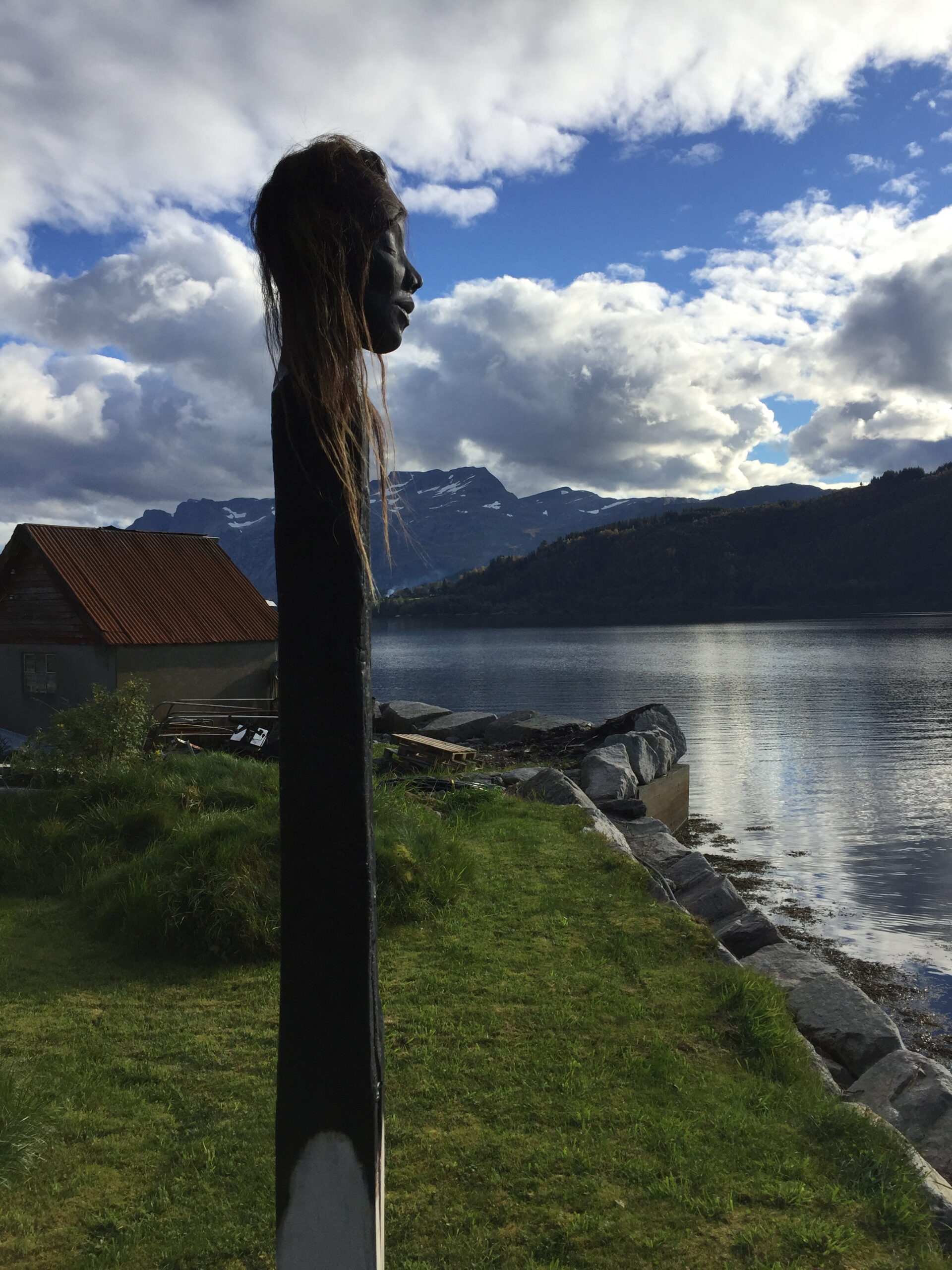 Standing its ground
The Elder knows

If time is an illusion
Then Mastery is its greatest fool